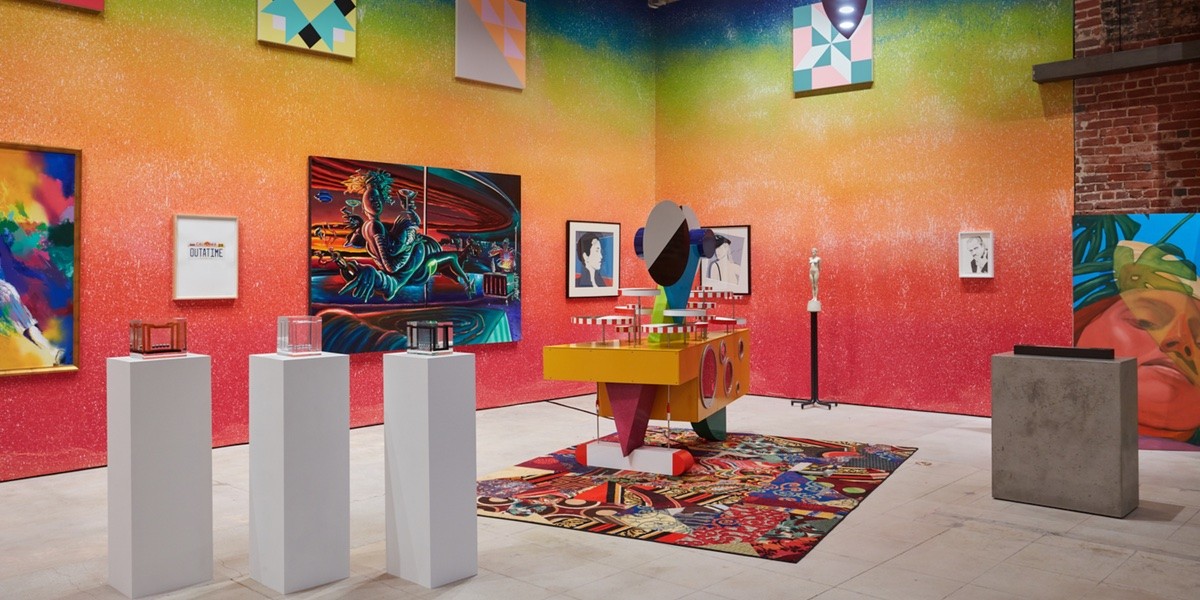 “An Homage to Hollis Benton” curated by Aaron Moulton

Over the Influence Los Angeles is proud to present this unprecedented homage to Los Angeles gallerist Hollis Benton. In 1980 the Hollis Benton Gallery opened its doors on Rodeo Drive in Beverly Hills. Architect Michael Graves gave the architectural concept pro bono. Decked out in chrome, marble surfaces, and harsh accent walls; it was a loud bullhorn for the day’s visual culture. In its nearly ten-year run the gallery broke all the rules for selling out and became an aspirational pioneer in the process.

Hollis Benton was a brash British collector with family connections to Hollywood. He bought Memphis furniture, Patrick Nagel paintings, and Robert Graham sculptures. His scene was never part of the mainstream art world of Los Angeles and for him that made him a maverick. In 1979, thanks to Benton’s long friendship with Hugh Hefner, the artists Patrick Nagel and LeRoy Neiman both began collaborations with Playboy magazine. It would rocket their fame making them voices of a generation. For nearly a decade both artists would paint multiple exclusive images for every issue of Playboy. Neiman became the Playboy Mansion’s artist-in-residence.

Benton presciently understood the potential for getting his artists’ work into print, on television and in film. Sylvester Stallone’s appreciation of LeRoy Neiman’s paintings would land Neiman a bit part as the ring announcer in Rocky III (1982). Patrick Nagel’s work made the cover of Duran Duran’s Rio album, was set design for David Copperfield and became an advertiser’s dream. The gallery would furnish movies with artworks to backdrop scenes in classic films like Wall Street and Less Than Zero (both 1987). Director Martin Brest made the Hollis Benton Gallery the focal point for his 1984 hit Beverly Hills Cop. When Eddie Murphy enters the gallery a solo show of LA artist Don Sorenson’s “Greek Temple” paintings can be seen on view. In the film’s deleted scenes Benton himself plays a small role as a posh collector at an opening.

Exhibitions that were important to the gallery’s legacy are referenced throughout this homage presentation at Over The Influence. Among them is Benton’s 1987 hit “Slippery When Wet: Fresh Painting Now” which placed late works of Patrick Nagel among Don Sorenson, James Havard, Robert Yarber and LeRoy Neiman. “Videodrome: Art, Consciousness and the Cathode Ray” (1988) was his effort to explore media-driven artworks presenting Mark Mothersbaugh, Trent Harris and Vuk Cosic amongst other artists. His long relationship to Memphis artist Peter Shire is made tribute in the artist’s large chandelier work hovering above Shire’s own version of the famous table seen in Beverly Hills Cop. This exhibition mixes in a survey of contemporary artists from Los Angeles and afar whose work synchronizes with Hollis Benton’s legacy.

In 1989 amid financial trouble from the Black Friday Crash, Hollis Benton suddenly shut his doors. He would die months later from a drug-related heart attack. He’s buried in Forest Lawn Cemetery a few hundred yards from Michael Jackson, a long-time collector of both Neiman and Nagel. The storied gallery was later converted into a shoe store; many of the gallery design elements were left in tact. This tribute to his legacy is a celebration of Los Angeles and the 80s as well as art worlds past and parallel: a hagiography. Hollis Benton is that low-hanging fruit that hindsight discovers in nostalgic avant-gardes.