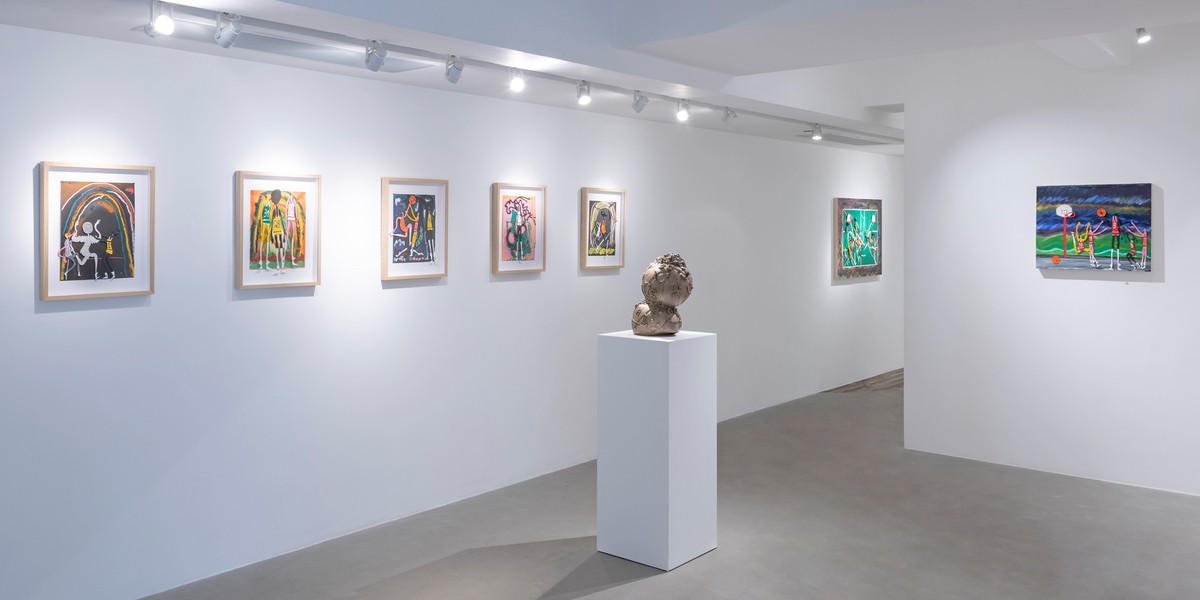 Southern California-native and multidisciplinary artist Devin Troy Strother hasn’t been able to avoid discussing race and its prominent role in American life. As a black kid growing up in a predominantly white neighborhood in the 1980’s, Strother had a much different experience with his black identity than generations before him. Strother found that it was nearly impossible to be a black artist and not make work that was interpreted as being about the black experience; so he chose to celebrate black culture with comedy rather than take the more heavy-handed approach of some of the most well-known black American artists such as Kara Walker or Glen Ligon. Strother’s work acknowledges the foundation of “American Culture” in that of African-American performers and entertainers— from Jazz and the blues, to contemporary dance, sports and hiphop. He uses the stereotypes of the black entertainer to regain control of the narrative which often fetishizes black people’s representation. Each artwork is planned like a veteran stand-up comedian – the work itself is the setup for the joke with the title as the punchline. The lengthy often absurd titles have become a signature part of the artist’s practice, supporting his visual vernacular with an additional layer of wit.

For his exhibition at Over the Influence, Strother has looked back at the mythology surrounding the black athlete and, in particular, basketball. Americans love a rags-to-riches story, and what story has more drama than a young black kid from a bad neighborhood who surpasses the systematic and economic barriers of his community to become an icon? Players like Michael Jordan and LeBron James have a legendary place in American mythology – a status that has transformed them into a form of signage that represents something that transcends superficial critiques like race and background. Through his exploration of basketball as a unifying American story, Strother exposes this aspect of contemporary culture as nothing more than another minstrel-scheme. In Strother’s newest body of work, he systematically works to dismantle the stereotype of “natural black athleticism” by putting in players of all races, in settings that reflect both the inner cities and the bucolic suburbs. Taking cues from Romare Bearden’s groundbreaking collage’The Block’ (1971), Strother’s work shows a slice of contemporary life with basketball as the common denominator. In 1977, Bearden’s friend the novelist Ralph Ellison wrote that Bearden’s collage created “a place composed of visual puns and artistic allusions… where the sacred and the profane, reality and dream, are ambiguously mingled”. This quote could easily be applied to Strother’s new narratives, where ghosts and kids from all backgrounds mingle on the basketball court at dusk, or an audience of floating heads gawk at the gangly spectacle of black players doing a improvised dance performance that echos past lives from tribal dances that took place in mother Africa and the cakes walks of the American South.