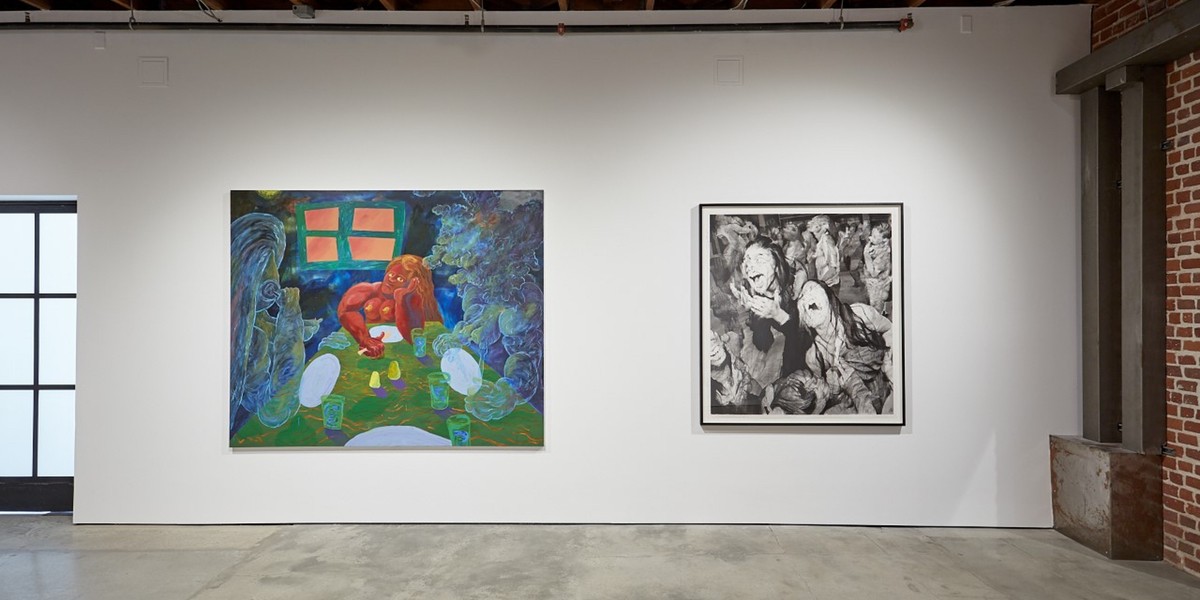 Born in New York City and raised in New Jersey, Ana Benaroya combines the visual language of caricature, illustration and narrative to create hyper scenarios where highly muscular and seemingly powerful, deviant women dominate. Drawing influence from comic books, Saturday morning cartoons, imagery of athletes and body builders, Benaroya depicts these mighty figures as extensions of her own body, constantly pushing the physical and emotional limits that rival not only the physical strength, but also the sexual aptitude commonly associated with masculinity or men.

Through humor, Benaroya explores and challenges a culture devoid of images portraying lesbian desire while envisioning a world in which division of strength and power no longer exists between men and women.

Anna Park’s works are disquieting scenes in which hordes of figures are depicted in chaotic, dynamic instances. Comically sinister at first glance, the hysterical emotions and cartoonish gestures give form to dysfunctional behaviors one might experience during a wild social gathering. Sourcing from the near endless streams of content accessible on the internet, the artist finds and re-appropriates found images, integrating her own imagination to create large, black and white work on paper. Park continues to explore the nature of mark making with charcoal and graphite, celebrating the medium as a way to develop a unique style and subject matter. Born in South Korea, Park lives and works in Brooklyn, New York, in her final year at the New York Academy of Arts. The subversive power of dark humor underlies the exhibition as the two artists, through their own distinct practices, reflect on certain social elements that inform human behavior.

Ana Benaroya received her MFA in painting from Yale University in 2019 and a BFA from the Maryland Institute College of Art in 2008. Since 2011, Benaroya’s work has been included in numerous group exhibitions throughout the United States, including New York, Connecticut, Colorado, Minnesota, and New Jersey. Two First Names is the artist’s first two-person exhibition in Los Angeles, California.

Anna Park studied at the Pratt Institute, New York and is currently finishing her studies at the New York Academy of Arts. Having recently completed a two-month artist residency in Leipzig, Germany, Park has lived in New Zealand, as well as in California and Utah, before settling in Brooklyn, New York. Two First Names is the artist’s debut exhibition in Los Angeles, California.